​Hyde Park Union Church, nestled in the heart of Chicago’s Hyde Park neighborhood, has long been a bastion of progressive Christianity on the South Side. 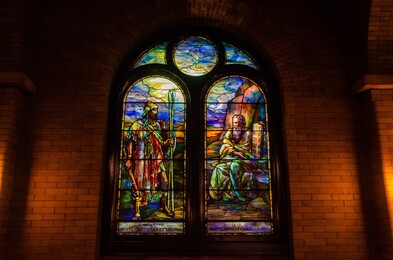 Our congregation was first formed under the name “First Baptist Church of Hyde Park” in 1874 and was remarkably influenced by the founding of the University of Chicago. This period of growth was spurred by the presence of President William Rainey Harper and other early key faculty figures in the life of the church, who held leadership positions at our church as well as at the fledgling University. We found our home on the corner of 56th and Woodlawn, a stone’s throw away from the University’s campus. In 1904, we started calling ourselves Hyde Park Baptist Church and two years later dedicated our, dare we say it, iconic sanctuary where we still worship over one hundred years later. In 1926, the older Christian Education wing was renovated to our present and grand four-story structure.

The first half of the twentieth century saw Hyde Park Baptist Church through the pastorates of three ministers: Charles W. Gilkey from 1910 to 1928, Rolland W. Schloerb from 1929 until his death in 1958, and the overlapping service of Norris L. Tibbetts from 1923 and 1942. Working alongside University faculty who were also church members – including President Harper, Gerald Birney Smith, and Shailer Matthews – the ministers and congregation at Hyde Park Baptist Church settled into our identity as a hub for progressive and liberal Christianity. This was in response to what is now known as the Modernist-Fundamentalist Controversy, which began in the Presbyterian Church and spread to other denominations in the United States.

In the early twentieth century, Protestant denominations wrestled with the traditional theological teachings and interpretation of the Bible and the newly emerging critical scholarship on the historical context of the Bible and modern science. Liberal leaders at the time approached this problem with a skeptical eye towards traditional doctrines and using the practical ministry of Jesus as a method of solving the social problems of the time. We are heirs to this approach, as in 1926, Hyde Park Baptist Church made the decision to receive all serious Christians into our membership and fellowship – no questions asked. No mode of baptism questions, and no test of faith. We have long held the historical belief that our church should take all kinds, based on the teachings of Jesus and in response to a world that does not treat all people with justice and care.
​
Pastors of Hyde Park Union Church have included Thomas W. Goodspeed, Charles W. Gilkey (pastor from 1910-1928, and first Dean of Rockefeller Chapel), Norris L. Tibbetts (1923-1942), Rolland W. Schloerb (1929-1958), Gerald Birney Smith and Shailer Mathews (n.d.), E. Spencer Parsons (1959-1965, longest-serving Dean of Rockefeller Chapel), Robert G. Middleton (1965-1971), Edgar A. Towne (1972-1975), David L. Bartlett (1975-1979), W. Kenneth Williams (1981-1985), Susan B. W. Johnson (1984-2015), Ashley Whitaker (2016-2018), and some interim pastors. Co-pastors Veronica Johnson and Sarah Lusche were installed in late 2018 and are now leading our congregation. In 1963, the church affiliated with the United Church of Christ and, in recognition of its dual association, changed its name to Hyde Park Union Church in 1965.